Matt Gondek is an American artist. Matt’s art has been exhibited around the world, from his current base in LA to Paris, New York and Hong Kong. Matt creates Deconstructed Pop Art in which he tears down his childhood cartoon idols. Matt talks to Enness about what inspires his art, punk influence and his creative journey.

How did your career as an artist begin?

I’ve been drawing since I was a kid, but in some ways, my journey started with band t-shirts. I went to a festival in another state with my roommate, and we happened to get talking with one of the bands that were playing. My roommate offhandedly told the band that if ever they needed a place to stay in Pittsburgh, where we lived, they could come and stay with us. We didn't think much of it at the time, but two years went by, and out of the blue, the band contacted us and asked if they could stay while they did a show in our town.

After the show, we were sitting in our living room with the band, and the lead singer picked up a stack of my drawings. He was surprised that I could draw as we hadn't talked about it, but he liked my work and hired me to do a band t-shirt for them. Right after that, the band was signed to a major record label, and they had their t-shirts in Hot Topic, a store that sells band t-shirts and merchandise across the US. I was 23 at the time, and suddenly I had my design on a t-shirt in all these stores across the country. It gave me leverage to approach other bands and ask if I could design for them, too, and that's pretty much how I got the ball rolling. 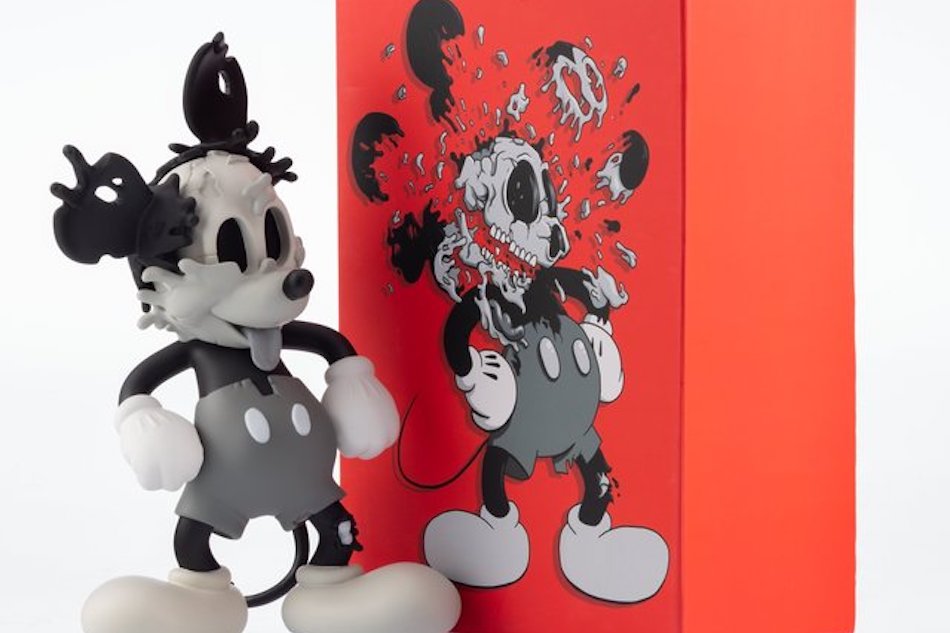 Besides art, you have also done other creative work, such as designer toys. Could you tell us more about that?

I'm a businessman, and I'm interested in the business of art, and I'm always looking at ways to find different avenues to make money or find a new fan base. I always think of my career like a tree – the trunk is my art practice, but all the branches are those different avenues I explore over time. So, there's a branch that's toys and a branch that's paintings and another one for NFTs and murals and clothes.

The best thing I've done so far was to see my work in 3D format. As artists, we're used to seeing everything 2D, on a screen or a canvas. When I make toys or a sculpture, it's great to see it in 3D and be able to hold it. 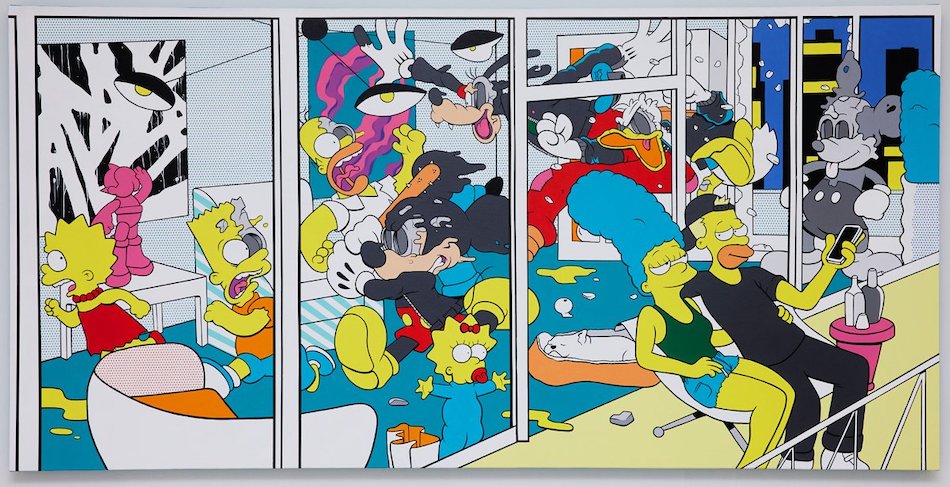 How would you define the style/movement of your art?

I’m a pop artist, so I use pop culture as an access point. The thing about pop art that's so great is that it's such an approachable avenue into art – lots of my fans don't go to art galleries or necessarily know a lot about the art world.

Centuries ago, art was centred around the church and religion, because that was the day's pop culture. Life was much more hierarchical then, and God, religion, and powerful figures were central to day-to-day life. Today, it's not the same. I'm not religious, so characters like Bugs Bunny, Mickey Mouse and Bart Simpson were Gods to me when I was growing up – I spent all my time with them, and that's reflected in my work.

What does the term "deconstructive pop art" entail?

I spent a lot of time in punk bands, and I learned about DIY ethics. I've always leaned that way – I question authority and tear down hierarchy, so that's where the deconstruction part comes from. The icons come from my childhood heroes like Mickey Mouse and Bart Simpson. I tear down these icons through my work, so that's deconstructive pop art.

What are the key influences on your artwork?

When I was in my early teens, I saw a comic book by Rob Schrab, who had self-published an independent comic book. It was a small operation, and it was the first time I realised that anybody could do anything.

Then there was Andy Warhol, who's from Pittsburgh, like me. He didn't influence me in the sense that our styles are the same, but he influenced me in terms of the networking and business side of the artwork and his business acumen. When I was in my late twenties, he had an art show in Philadelphia: it was the first time I'd seen cartoons in a fine art environment, which opened up my eyes to what was possible.

Finally, Roy Lichtenstein and his Ben-Day dots were a key influence. Lichtenstein is my favourite artist, and I like how he took comic books and cartoons and turned them into fine art using the same printing methods – it's fascinating.

What would you say has been the highlight of your career so far?

All of it! I'm from a small town, and I never dreamed of achieving so much. The fact that I've gotten this far means that everything is a highlight. 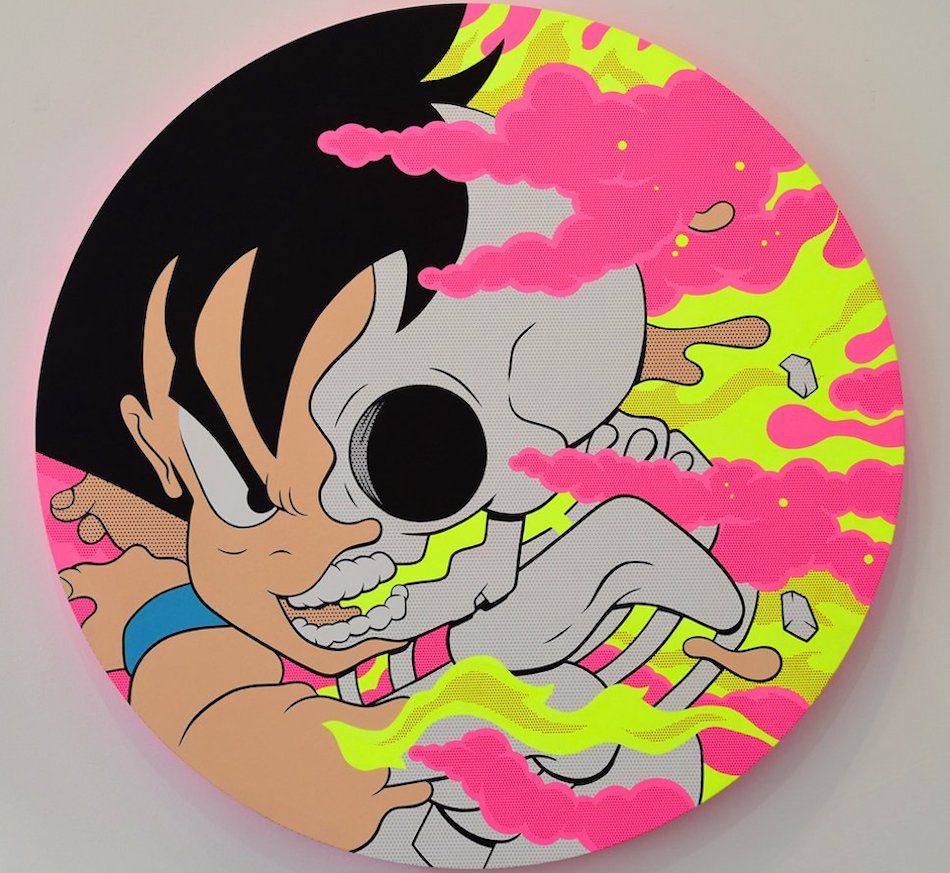 What projects are you currently working on?

This November, I'm running a solo show in Japan: Missing Person. It's about the fact that I recognise that some of the human element in my work is leaving because of the way I create and the tools and machinery I use. It's also about how I lose myself in my art: I spend every moment making it and thinking about my it, so the show is also about my identity – am I a person or an art practice?

I'm also working on a project called Blackbook. I've always created merchandise, but in small runs, so it's been more like a side-project than a priority. So, I assembled a team, and we made clothing and house wear that's more like artwork – every tag is hand-painted, and the artwork on the clothes is sketches and ideas that go into my paintings. The name Blackbook is inspired by an artist's sketchbook.

In what direction would you say the contemporary art going?

I've been watching NFTs closely, which I think is a bit of the new frontier. I don't think fine art or contemporary art will disappear; it's just that things like NFTs will become a new branch of art.

I think NFTs are amazing, but I see a lot of focus on money, which I don't think should be the first thing that comes to mind when people create art. It'll be interesting to see how it evolves.