Reviewed in Country Life magazine in 1943, Hunter’s Lodge is the most historic property in Belsize Village with a history that includes Royalty, aristocracy and a British Prime Minister dating back to 1496 when a manor house, known as Belsize House, was built off Belsize Lane, complete with a lodge house fronting onto Belsize Lane on the site of what is now Hunter’s Lodge (ref: John Rocque’s Belsize map, 1746).

In 1542 the Belsize House estate was given to the Dean of Westminster by King Henry VIII with the manor house and lodge leased to wealthy tenants to generate income for Westminster Abbey. The lodge was used to house guests visiting the manor house for parties and hunting who included diarists Samuel Pepys and Sir John Evelyn. 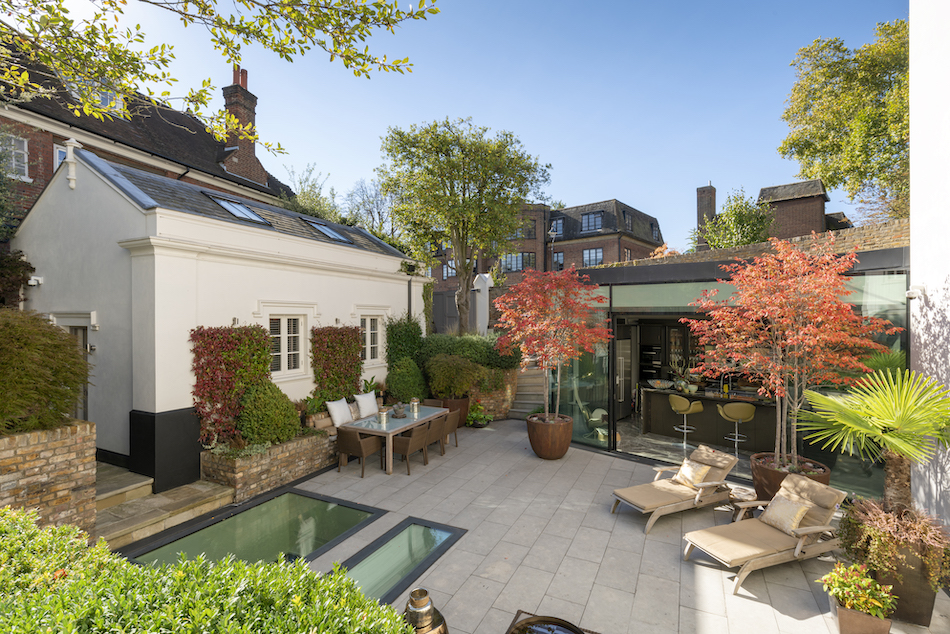 Between 1661 to 1798 Belsize House and lodge were leased by the Chesterfield family, initially by Katherine, Countess of Chesterfield, Lady-in-Waiting to Queen Catherine of Braganza, the wife of King Charles II, and after Katherine’s death (1667) by her two sons, the first Lord Wotton (who entertained Samuel Pepys at the lodge house in 1668) and her second son, the Earl of Chesterfield and his descendants. Between 1704 to 1740 Charles Povey hired the estate for parties and in 1721 entertained George, Prince of Wales, and his wife Caroline, at Belsize House with the lodge house used as a raucous party venue to wine and dine the Royal visitors. 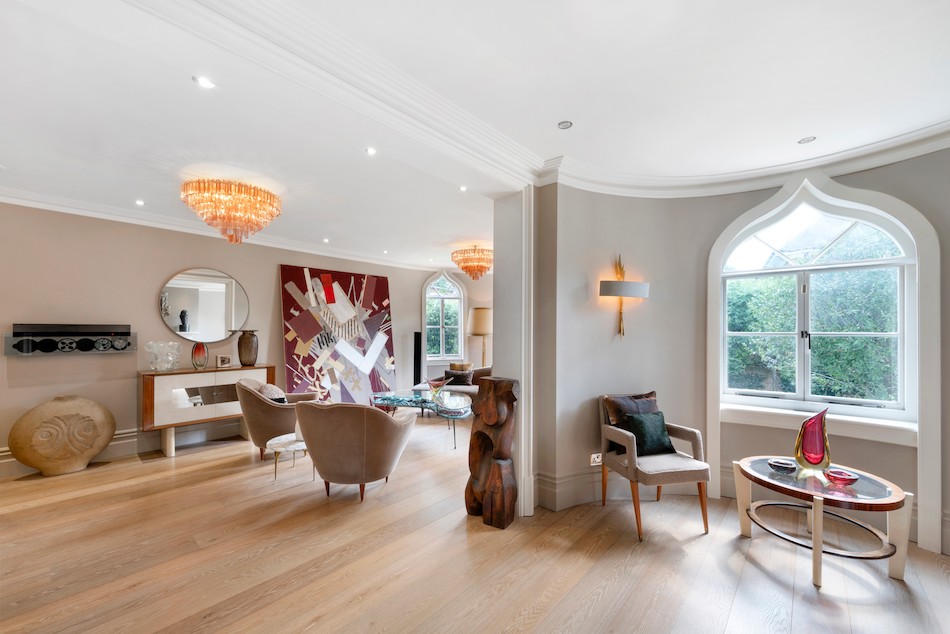 Between 1798 and 1807 Belsize House and lodge were leased by Spencer Perceval, who in 1809 was to become British Prime Minister. The politician used the lodge house as a retreat where he wrote his speeches for Parliament. In 1807 Perceval became Chancellor of the Exchequer and relocated to Downing Street leaving Belsize House and lodge vacant.

In 1808 the Dean of Westminster surrendered his freehold rights and the Belsize House Estate was divided into several freehold plots in order to meet the increased demand for London mansions set in generous gardens. As a result the lodge house was put up for sale, and later in 1853 Belsize House was demolished. 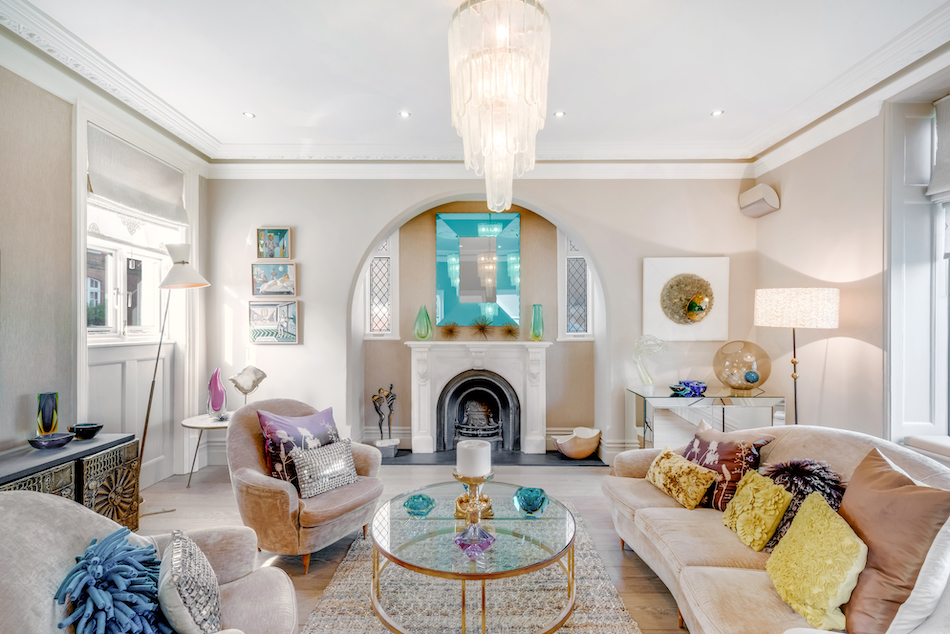 In 1808 the lodge house was purchased by wealthy City of London merchant William Tate – a relative of the Tate & Lyle dynasty - who demolished the property and commissioned architect Joseph Parkinson and builder George Todd to build him a new mansion on the site in 1810-12, which was named Hunter’s Lodge.

Best known for his work on Magdalen College, Oxford, in 1805 Joseph Parkinson had designed a country house called Mabledon House, which he used as his inspiration for Hunter’s Lodge. Designed in Gothic-revival style, with features highly reminiscent of Royal Lodge and Cumberland Lodge in Windsor Great Park, Hunter’s Lodge has striking white-stucco facades with details including arched windows, oriel bay window, ornate castellated pediment and a magnificent garden façade with three round towers. 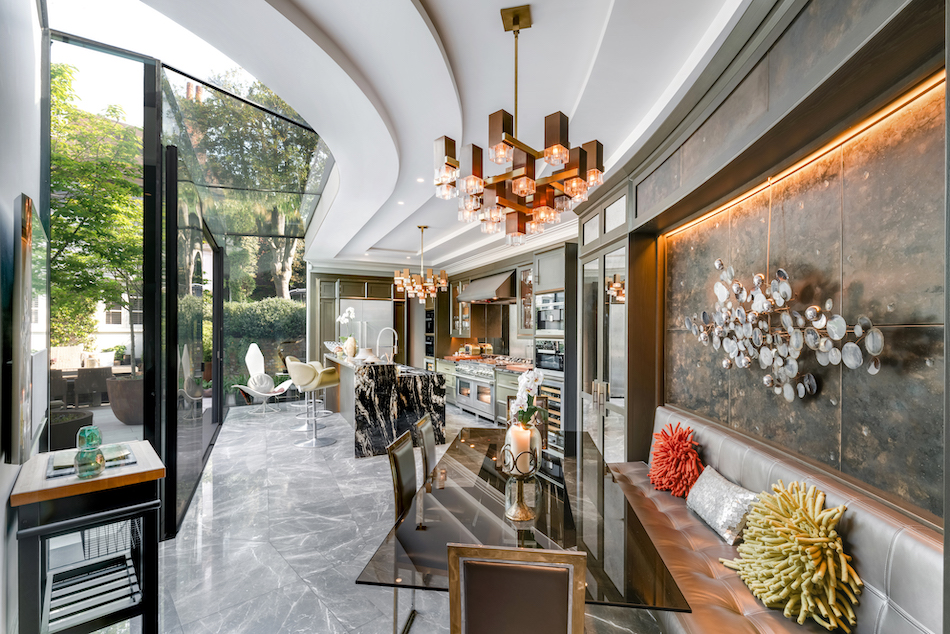 In 2008 the current owners purchased Hunter’s Lodge and started planning applications in order to undertake a major three year refurbishment and modernisation of the Georgian mansion including a sympathetic new build extension, the creation of a basement leisure floor and the restoration of the mews cottage. Meticulous quality and fine attention to detail has created a large modern family house with a leisure floor and state-of-the-art plumbing, heating, comfort cooling, wiring and technology installed behind the walls, combined with sympatheric heritage restoration. 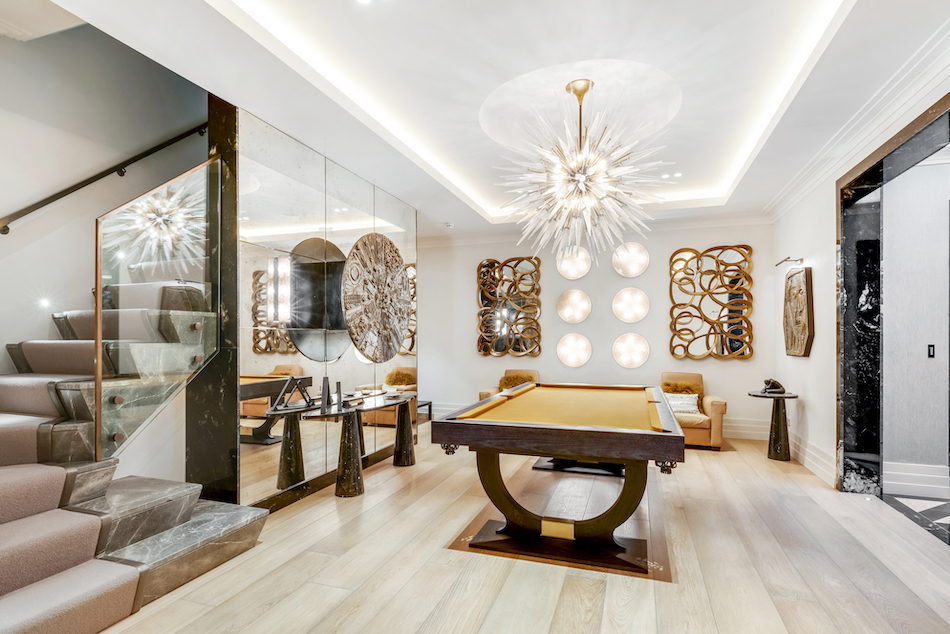 The most striking and unique residence in Belsize Village, Hunter’s Lodge offers substantial accommodation over four floors and mezzanines arranged over basement, garden floor, ground and first floor levels. The round towers of the south facing garden façade give a number of the reception rooms and bedrooms the benefit of deep bay windows with natural light cascading through the bays providing the living spaces with an exceptionally bright and airy ambience.

On the ground floor Hunter’s Lodge has a spacious reception hall which provides access to a double reception room with bays, Gothic arched windows and a feature marble fireplace, which provides a drawing room and morning room. There is also a study with bay, stone fireplace and built-in cabinets and shelving. 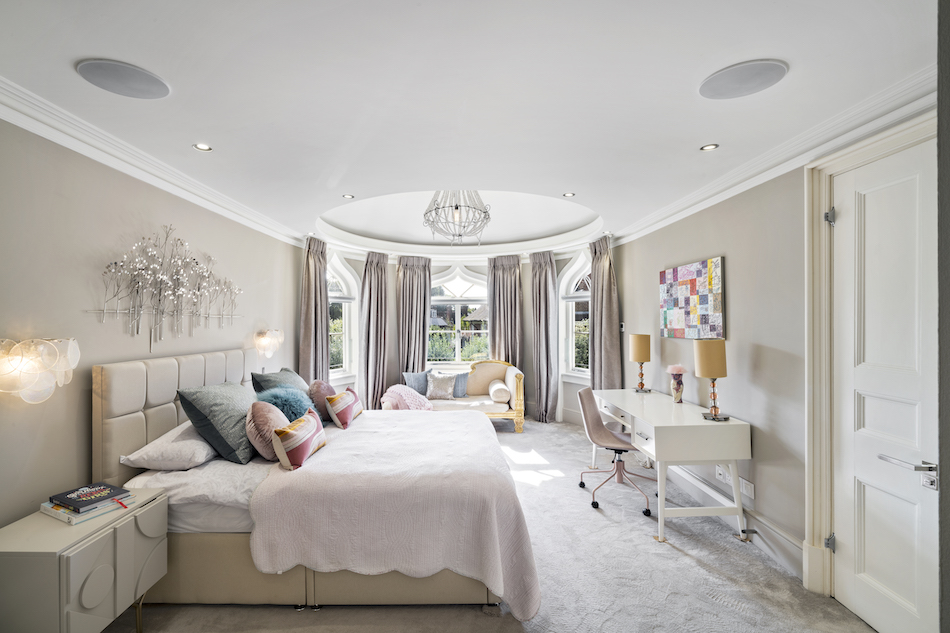 On the first floor is the principal bedroom suite which has a His bedroom with marble tiled bathroom with freestanding oval bathtub and walk-in shower and a Her bedroom with dressing room and veined marble shower room, with a main bathroom on a mezzanine floor above. There are three further bedrooms on this level including a guest suite with dressing room and ensuite bathroom. 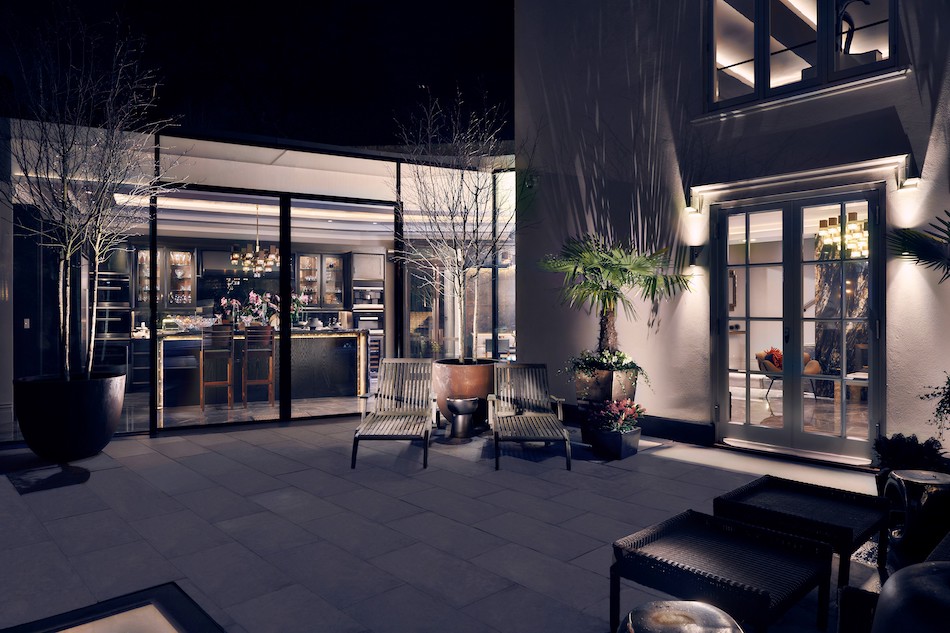 The garden floor has an upper and lower level, which open out onto two south facing gardens, an upper garden with terrace and lawn, with steps leading to a lower sun terrace. On the upper level there are two further guest suites both with double doors opening onto the upper garden and use of an ensuite bathroom. Alternative these suites could be used as entertaining rooms opening onto the garden. There is also a wine tasting/cigar room with an adjoining glass walled wine and champagne cellar. 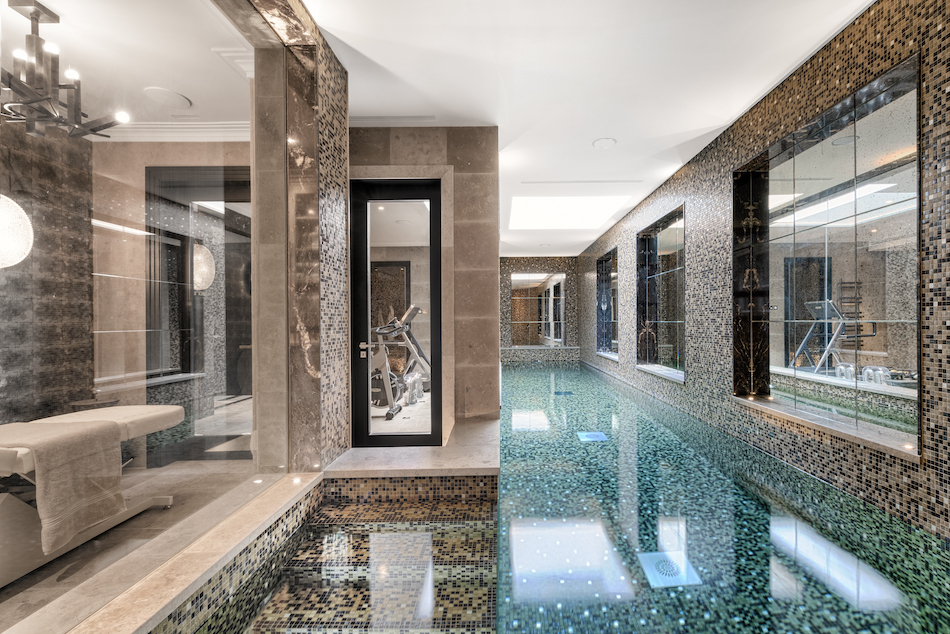 On the lower garden floor there is a large family room with a high ceiling, floor-to-ceiling marble feature fireplace and French doors opening onto the sun terrace. The family room leads into the family kitchen and breakfast room which forms a glass roofed and walled pavilion with sliding glass doors opening onto the terrace. During warm weather the doors to the family room and kitchen can be opened to create a spectacular inside-outside relaxation and entertaining space, with loungers and an outside dining table on the sun terrace.

Skylights in the sun terrace enable natural light to cascade into the basement leisure floor which has an 8ft high ceiling and features a large cocktail/games room, an adjoining cinema room and a health suite consisting of a gymnasium, steam room, treatment room and swimming pool. There is also a staff bedroom and ensuite shower room opening onto a lightwell patio. 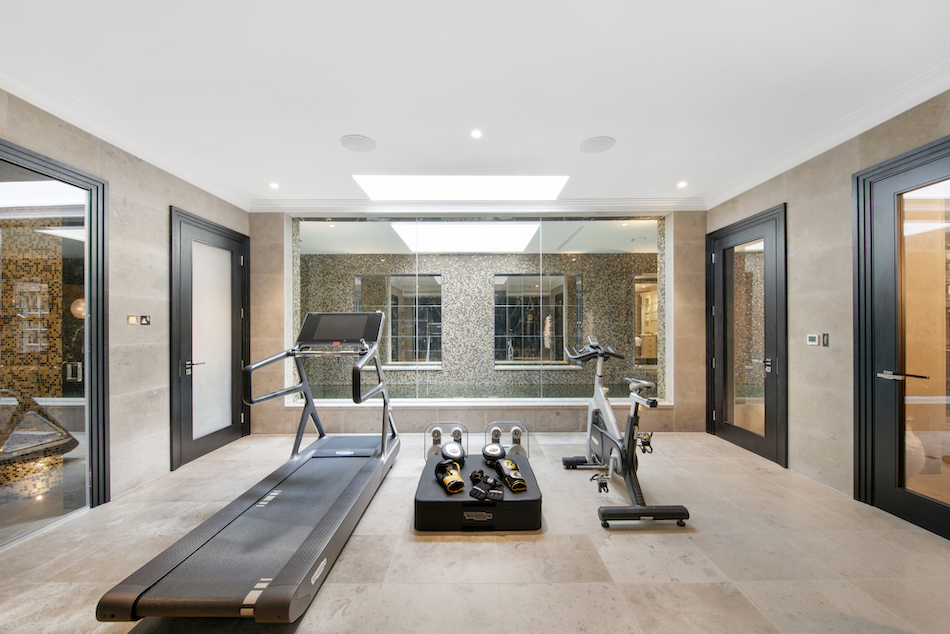 Beyond the garden, with its own independent street access, is the guest cottage/studio which provides a double height space with large picture window, kitchen and bathroom, with a mezzanine bedroom/living area above. The cottage/studio could be used as work-live space, business premises, accommodation for friends/family, home schooling or an exercise studio.

Hunter’s Lodge has been built to an exacting specification. Principal entertaining rooms have coffered ceilings with feature lighting, light oyster timber flooring and marble fireplaces, the family kitchen is bespoke design by McCarron & Company with black granite worktops, fitted units and cabinets and integrated appliances from WOLF, Miele and Gaggenau. 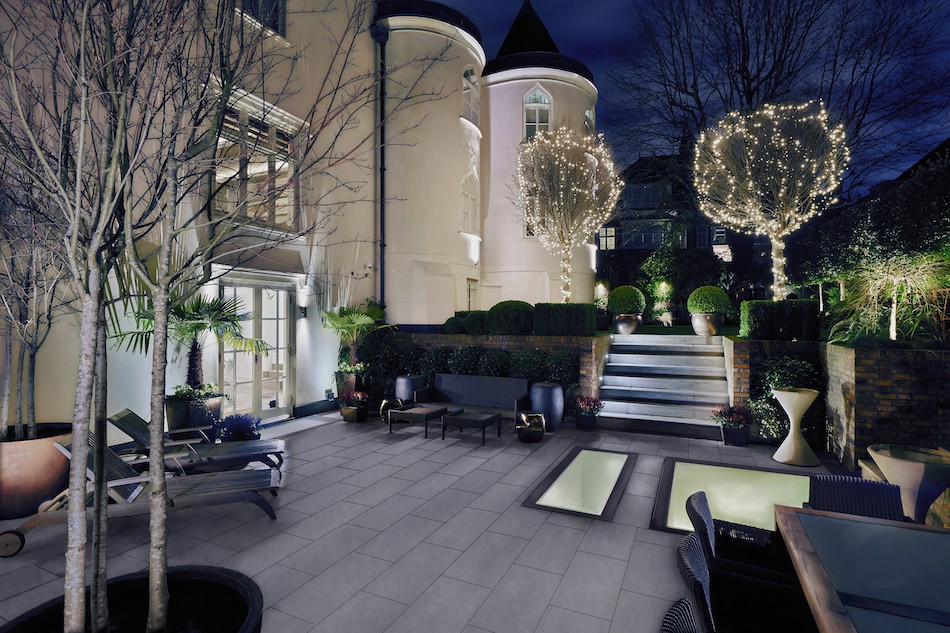 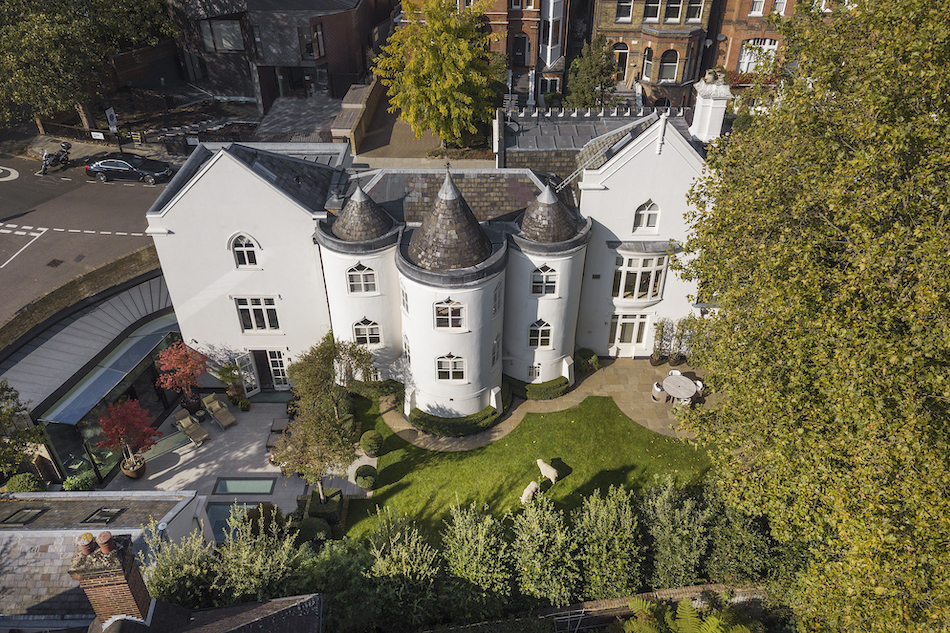