One of the most extraordinary new houses to built in Primrose Hill in living memory, Eglon House is located in a discreet gated mews, known as Eglon Mews, located in the heart of Primrose Hill. Designed in collaboration with architectural practice Chassay Last Architects and design house Russell Sage Studio it consists of two interlinked buildings which sit opposite one another across a private central garden courtyard, with the pair joined at lower ground floor level. 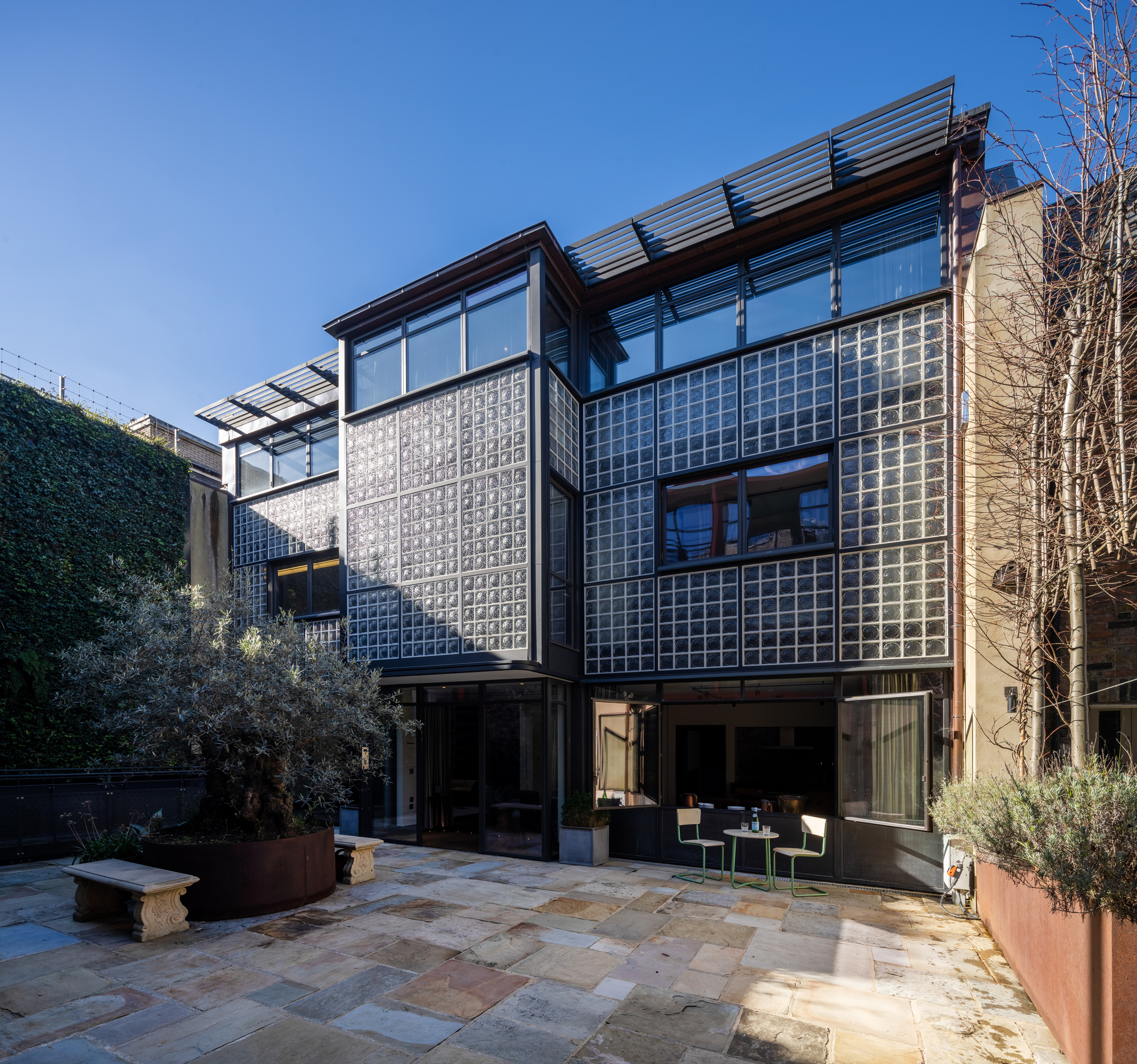 Best known for his gothic fantasy films such as Beetlejuice (1988), Edward Scissorhands (1990), Sleepy Hollow (1999) and superhero movies such as Batman (1989) and Batman Returns (1992) American film director Tim Burton (born in 1958) rented Eglon House for a number of years from 2016, using the property as his London home, with part of the accommodation used as his creative studio where he completed the 2019 Film Dumbo for Disney. 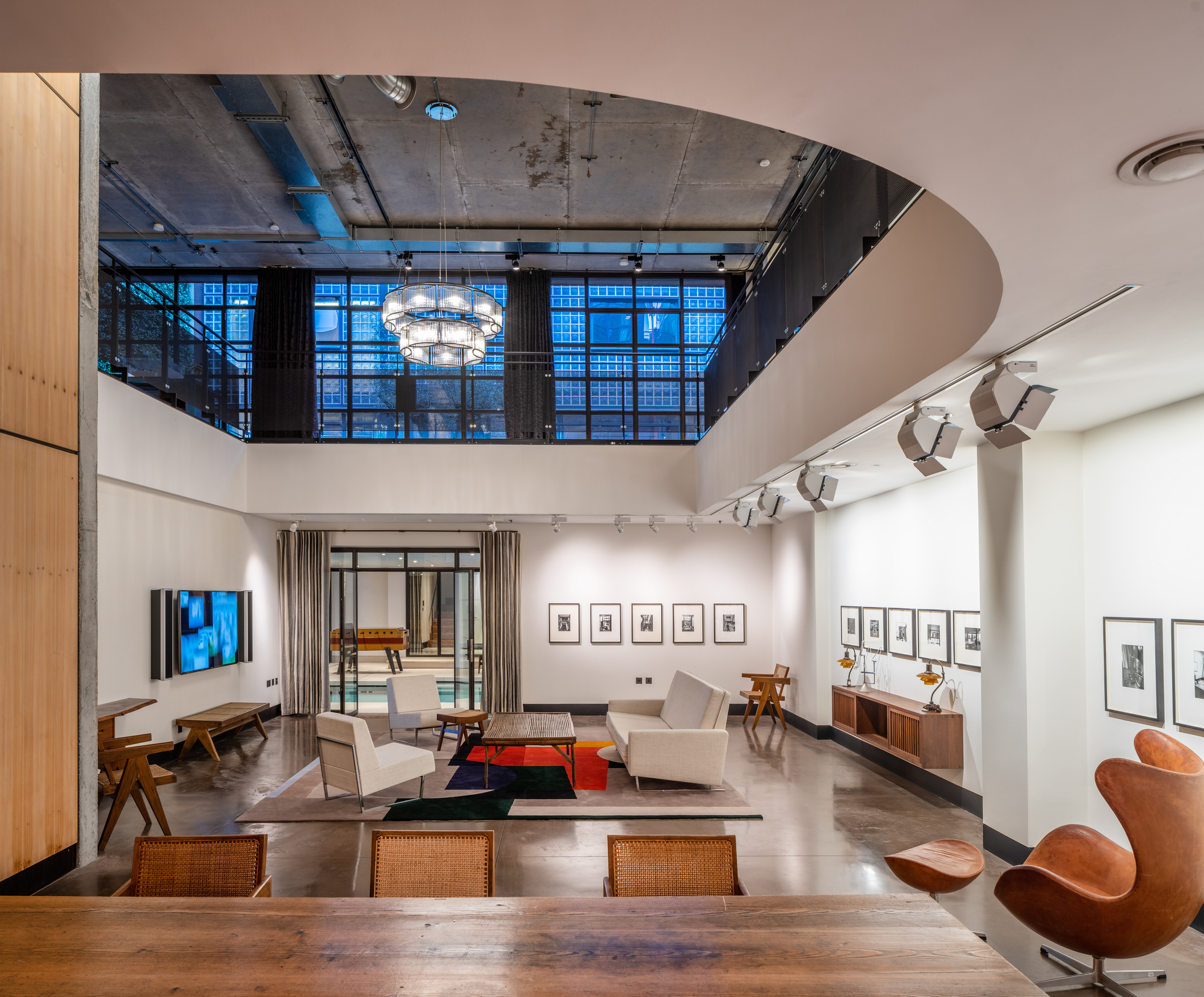 The east wing of Eglon House has on the lower and ground level a dramatic double-height grand salon – which recalls the Art Deco hall at Eltham Palace -  with an upper galleried level containing the kitchen and breakfast room and dining room. On the lower level the salon leads into the leisure suite which includes the swimming pool that doubles as a cinema room, with a mechanical floor and waterproof screen, alongside a leisure room and gym with a purpose designed cocktail bar.

The first floor of the east wing offers over 2,000 sq. ft. of space which has currently been configured as the principal bedroom suite. The second floor provides a glazed ‘orangery’ that would work well as a large home office space.

The east wing of Eglon House has on the lower and ground level a dramatic double-height grand salon – which recalls the Art Deco hall at Eltham Palace -  with an upper galleried level containing the kitchen and breakfast room and dining room. On the lower level the salon leads into the leisure suite which includes the swimming pool that doubles as a cinema room, with a mechanical floor and waterproof screen, alongside a leisure room and gym with a purpose designed cocktail bar. 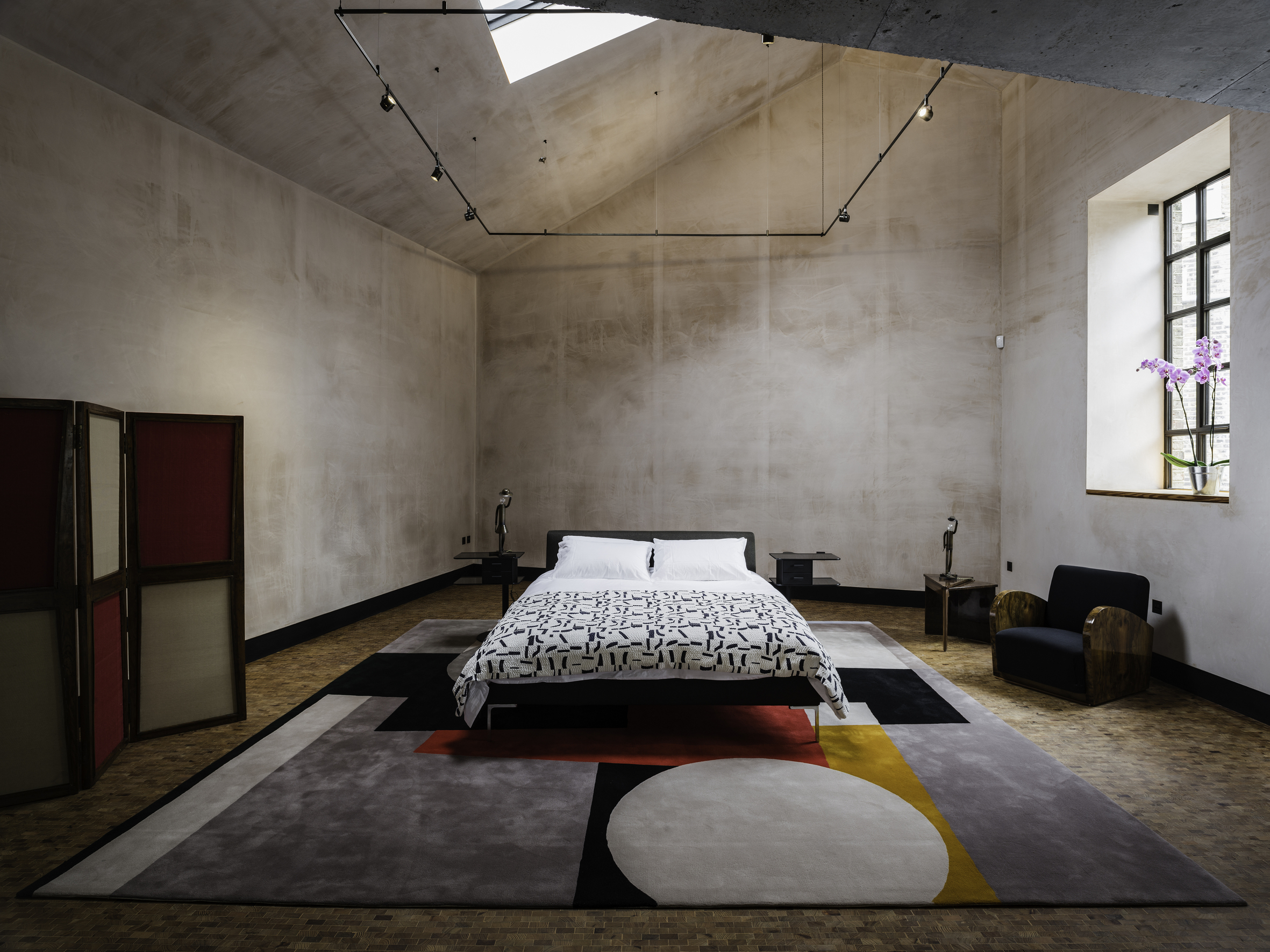 When Tim Burton was living at Eglon House, he utilised the east wing of the house to write and produce Dumbo and the west wing to provide accommodation for executives and staff working on the film. This underlines the highly flexible space and uses of Eglon House which could be used as both a home and business base for a business owner including a creative studio for a film director, advertising/media firm or private family office/financial entity.

The site of Eglon House has a fascinating history, originally serving as stables and barns which were utilised in World War I to manufacture shell casings. The site was then used by Express Dairies to service the milk production from cows who grazed on Primrose Hill up until the 1950s. In the 1970’s it was converted into the world-renowned Mayfair Recording Studios where the likes of David Bowie, The Clash, Oasis, The Smiths, Tina Turner and Pink Floyd made and recorded hit records. 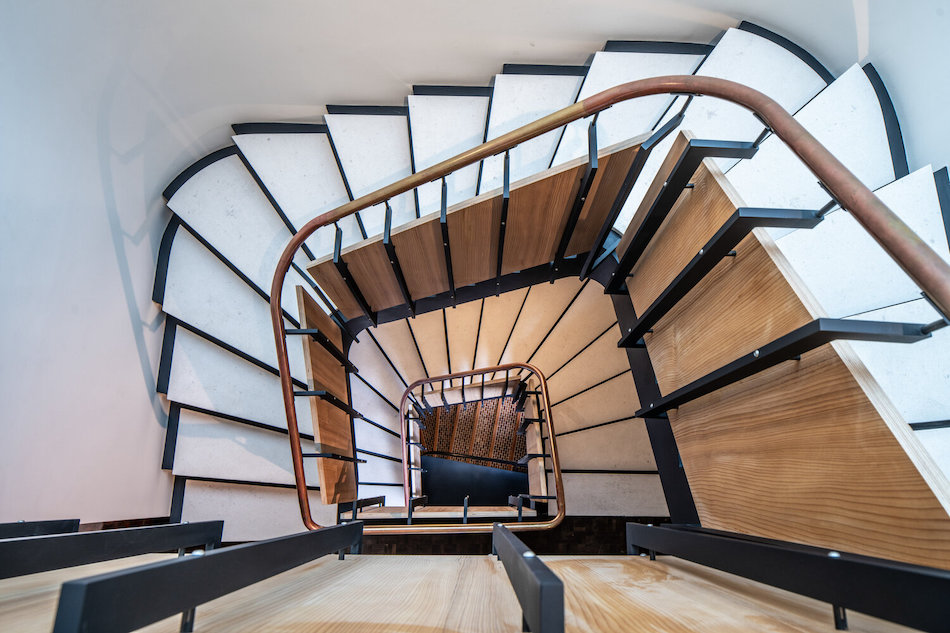 After six years of design and construction Eglon House was completed in 2016 with its design inspired by Pierre Chareau’s iconic Maison de Verre in Paris (built from 1928-1932), meaning ‘House of Glass’ located in Paris, which pioneered the modern style of architecture, combined living accommodation and commercial space and used glass, glass blocks and steel and a juxtaposition of “industrial” features with a more traditional style of home décor.

Despite many similarities with Chareau’s Maison de Verre, Eglon House was created largely by English craftsman with features including a staircase made from pitch-pine and grout mixed with Portland stone. Elsewhere Lebanese cedar is combined with elegantly patinated Italian marble with other details such as a bespoke custom-designed kitchen, museum-grade bronze track lighting, walls reinforced to take heavy large format artworks and solar PV matting set into the triple-glazed roof lights so that it simultaneously reduces any glare from the sun and generates energy. 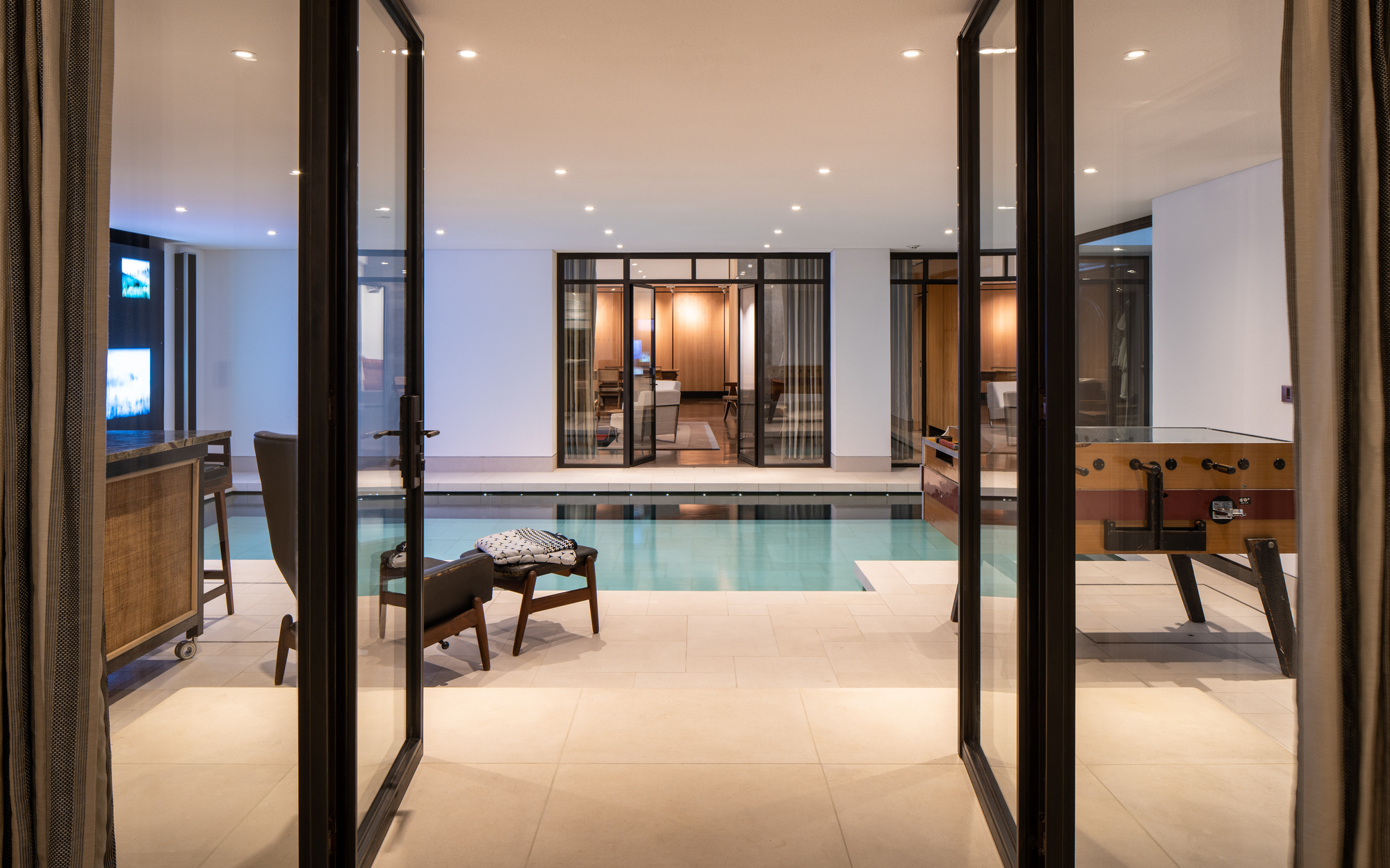 Russell Sage, Founder & Executive Creative Director at Russell Sage Studio says: “Working on Eglon House with a such a collaborative team of designers and highly skilled makers was a really positive experience. Having the chance to use fabrics designed by Henry Moore and re-execute some of Pierre Chareau’s furniture was an excellent, rare opportunity. I love the house because it finds the ideal balance and fluidity for living and working environments that weave in and out of one another effortlessly; so much more important in the world we now find ourselves.”

Elgon House is situated within moments of the open green space at Primrose Hill and Regent’s Park as well as the shops and restaurants located in Primrose Hill.